This is a new weekly report called America’s Cup Uncovered.

The 34th America’s Cup challenger series will race with multi-hulled, wing-sailed, fast boats called AC45’s. The world series begins in Portugal on August 6th. The AC45 is like nothing seen before in Cup history. The boats have been described as “dangerously fast” and there have been some spectacular capsizes. 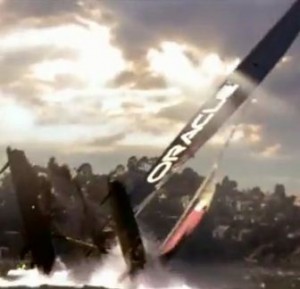 The AC45’s will come within a few hundred metres of the marina, so there could be huge crowds who will be able to clearly see the race from the shore. They are the forerunner of the 72 foot AC72, which will be what the Americas Cup is won or lost in.

A section on New Zealand’s challenge for the America’s Cup begins at 18m 30s and includes a nice tribute to the late Sir Peter Blake as the leader of the winning team in 1995. There’s a few oddly chosen interviews including an Auckland taxi driver, cafe barista, random businessman and for some reason, Jeremy Corbett from More FM. Perhaps the NZ Americas Cup team are too busy to waste time on such frivolity when there are trophies to be won!

You can find out more about the 2013 Americas Cup here or go direct to the Emirates Team New Zealand website.