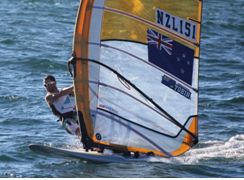 The NZL Sailing Team’s Olympic representative in the the Men’s RS:X, JP Tobin, has achieved a bronze medal finish at the 2012 RS:X Class World Championships.

Throughout the event, except for his single drop, JP maintained a top five finish in every race. This is his best result ever at a Windsurfing World Championship.

This bronze medal success rides on the back of JP’s 5th place finish at the 2011 RS:X World Windsurfing Championships only a few months ago in Perth. There, JP’s training partner Dorian Van Rijsselberghe of the Netherlands was crowned World Champion, but this time he finished 4th just 0.6 points behind JP.

NZL Sailing Team’s top female RS:X sailor Natalia Kosinska had a very promising start to the regatta, with early results within the top ten. After one tough day racing in big breezes, Natalia was not able to make up the required points to stay at the head of the pack and finished 19th of 80 women at the event.

Tom Ashley had a similar regatta to Natalia, kicking it off with a 5th place result, and then hung around the middle of the gold fleet for the rest of the regatta, to finish 29th of 120 sailors in the Men’s Championship.

This regatta in Cadiz, Spain, was plagued by extreme weather conditions which cancelled racing for three of the four race days. Both the Mens and Women’s gold fleets were able to sail only 10 of 13 scheduled races, and neither were able to race the final double point medal race.

JP’s next major event to look forward to is the Skandia Sail for Gold regatta in early June, in Weymouth at the Olympic sailing venue. He is coached by Sydney 2000 windsurfing medallist and many time world champion Aaron McIntosh.