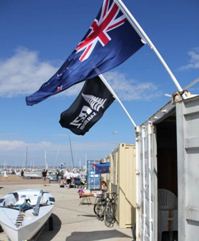 Racing started last night for New Zealand windsurfers Jon-Paul Tobin and Natalia Kosinska at the Weymouth and Portland 2011 International Regatta– this is the official London Test Event for sailing competition only one year away to the 2012 London Olympic Games.

On the opening day Tobin placed 6th in both of the two men’s RS:X races sailed which puts him in 6th place overall at this early stage. GBR’s Nick Dempsey and Tobin’s Dutch training partner Dorian van Rijsselberge are all tied up at the top of the table having each scored a win and a 2nd.

Kosinska opened with a 12th and a 10th in the two races sailed in the 28-strong RS:X Women’s fleet which puts her in 11th position on the leader board. Spain’s Marina Alabau dominated on day one with two races wins and consequenlty the early lead.

View a short clip with Kosinska after racing on day one here.

Both New Zealand’s windsurfers are pleased to have competition underway and will be back on the water for more racing tomorrow.

Peter Burling and Blair Tuke, in the 49er skiff, start racing Saturday, along with the Finn and Star classes.

“We can’t wait for the event to start,” report Burling and Tuke, New Zealand’s 49er representatives. “It will be good to test ourselves against the other top 24 countries in the 49er class.”

“Most of the 49er racing is provisionally programmed on the ‘Nothe’ course area. This area is very close to the cliffs and breakwater meaning great viewing from the shore but with limited space. Most of our races will be three or four laps which will make for some intense racing,” they explain.

The Weymouth and Portland 2011 International Regatta is an official London 2012 Test Event and part of the London Prepares series.

Racing runs from 2nd – 13th August with medal races scheduled over the final three days starting with the Men’s and Women’s RS:X on 11th August. All ten of the Olympic events are being contested with each nation able to send just one entry to each event.

YNZ will issue daily reports focussing on the kiwi team which will be published on www.yachtingnz.org.nz. And you can follow the NZL Sailing Team on Facebook.