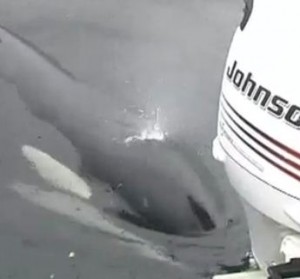 Luna the Orca plays with an outboard motor

You might have seen a video online of a dog playing with an Orca.

That Orca was “Luna” who was a common sight around Vancouver Island, Cananda back in 2001 where he was well known for playing with boaties in the area.

Somehow, Luna was separated from his pod at the tender age of just two years and lived alone off the Vancouver Island coast.
This video shows Luna coming right up to a boat’s outboard and mimicking the sounds it makes.

Sadly in 2006, Luna was killed in a collision with a tug boat. As so often happens with wild animals, Luna’s fascination with people ended tragically.

Human contact with whales and dolphins is a bone of contention in New Zealand. There have been many sea mammals killed by boats and there are studies that suggest too much human contact adversely affects their food intake. Not many people realise that there are currently less than 200 Orca in the whole of New Zealand’s waters. If you’d like to find out more about Orca in New Zealand, go to Orca Research.