Wet ride on the (not) White Island Race 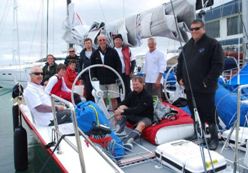 The crew on board Ray Haslar’s Reichel Pugh 42 before the race begins- the team won 1st PHRF.

The (NOT) Round White Island Race – renamed with a new course set following the grounding of cargo ship Rena off the coast of Tauranga. Media attention from the ensuing problems of oil spills and floating containers still unsecured is very much in the public eye – I rest my case.

Graham Mattew’s 55 foot Equilibrium and Ray Haslar’s Reichel Pugh 42 Rikki joined the fleet in a first coastal race for both. The two new yachts and their crews were severely tested with wind gusts of up to 40 knots, resulting in both skipper/owners suffering the old proverb “A racing yacht is a hole in the water into which you pour money”. Mattews was pretty happy with Equilibrium’s
performance in such heavy weather. When asked how the crew reacted to their unexpected broach he replied “All I heard was Stubbie (Paul Stubbs) saying Mmmm this is not ideal”.

Haslar was pretty chuffed at the overall performance of his crew and the lady in red. Scott Dickson, who recently returned to New Zealand (ex Pendragon), joined Rikki for the race. “An epic sail, she was well tested in this forceful encounter with mother nature, lots of fun downwind – she sails like a much bigger boat. Sail changes were a real test, Dylan and Westie did a hell of a
job on foredeck”. A very tired and wet Dylan Wichman just grinned “working the foredeck was like swimming in a fish tank – but we got it sorted”. Rikki’s broach was hard on equipment – Andrea Scopas; about 125 kgs bouncing off and breaking the port wheel was not a pretty sight, with wounds for both.

Said Haslar “It was a wild spinnaker ride out to Channel Island and Curvier then a beam reach from Curvier to the Poor Knights – outside the Barrier. Winds were gusting to 34 knots and at one stage Rikki was carrying a storm jib and two reefs in the main. There were several headsail changes on that leg with the mainsail reefs going in and out as the wind strength varied. After the Poor knights it was hard on the wind, with big seas and a lay through to clear the Hen and Chickens, rounding Sail Rock to port. A two-sail reach to Kawau – at Kawau the wind had gone from W to SW making it a hard beat into Auckland. It was wind against the tide – wet and cold – a most uncomfortable ride home.”